Tea Towel vs Dish Towel | Everything You need To Know

What are Tea Towels? What are Dish Towels? Are they the same? What are the differences between Tea Towel vs Dish Towel? Read on to find out. 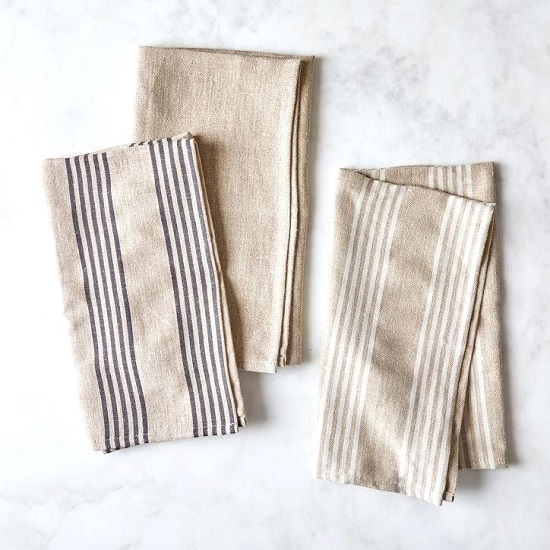 Both tea towels and dish towels are types of Kitchen Towels. Kitchen towels have many uses, but some of the distinct uses classify the different types of cloths into different names. Kitchen towels come in various forms and are useful all around the kitchen for wiping up spills, cleaning off cutting boards and drying hands and dishes – even holding hot plates.

These kitchen towels are sturdier than your bathing towels as they are more absorbent and durable for repeated washings and uses. People generally pick out kitchen towels that match the decor of their homes. Some people even prefer having multiple kitchen towels so as to quickly replace them after heavy use.

Let us look at the differences between Tea Towel vs Dish Towel:

Like their namesake, Dish Towels are useful for washing and drying off dishes. They prevent water spots from forming on your cookware. Dish Towels are generally very absorbent and leave no trace of any lint.

It becomes important to keep the Dish Towels washed and cleaned between cleaning sessions, otherwise, they might end up making the dishes dirtier instead of cleaning them. You should also keep them away from other towels to prevent the spread of any bacteria.

A separate clean Dish Cloth can also insulate the heat from your hands when you use it as a potholder.

Dish towels are made from a rough cotton material that is durable between heavy washing and wringing. Dish Towels are meant for rough use – more like a rag, than a towel.

Tea towels, on the other hand, are more of a decor item. Smaller than Dish Towels, these were originally accessories for Victorian-era England (18th century). Housewives of old would demonstrate their embroidery skills on Tea Towels and practice their craft. Made from linen or soft cotton, Tea Towels are more delicate than other kitchen towels.

They are useful in cleaning brittle cutlery, delicate china, furniture, and jewelry. That’s why Tea Towels are also known as “Glass Towels”. Avoid wiping off trays and dirty surfaces with Glass Towels. Instead, you could dry your herbs and vegetables with Tea Towels after rinsing them.

Tea towels are presented with dessert courses and Tea servings, as a napkin or a placemat to prevent drips and spills.

You should be gentle with cleaning Tea Towels as they’re not as durable as their other kitchen towel counterparts. Even while drying, you could just hang them on a drying rack as they can be wrinkle resistant. Avoid iron pressing as it might damage the delicate cloth.

Although the terms Tea Towel and Dish Towels are often interchangeable, it is important to demarcate the differences between them for a better understanding of their different functions.