Freshen up your lazy mornings with a cup of flavorful and nutritious Irish sea moss drink! Let’s find out the Sea Moss Tea Recipe below!

Sea moss is a wholesome superfood with numerous nutrients. To reap the astounding benefits of this seaweed, brewing its tea is the best and quickest option. Keep scrolling this article for the Sea Moss Tea Recipe.

What Is Sea Moss? 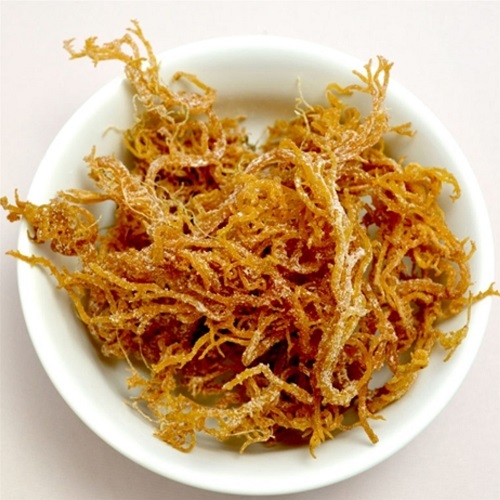 Sea moss, also familiar with the scientific name “Chondrus Crispus,” is an edible, super nutritious seaweed that grows near the rocky parts of Atlantic coasts. It’s frequently added to various skincare and haircare products because of its therapeutic benefits. Furthermore, Chondrus crispus can be consumed orally, either raw or with smoothies, soup, juices, and sauces. You can also use this seaweed gel topically to rejuvenate your dull and dry skin.

The common names of sea moss are:

How to Make Sea Moss Gel?

Before jumping to the instructions of sea moss tea, learn the Chondrus crispus gel recipe below.

If you don’t know how to make sea moss tea at home, check out the below recipes.

Packed with the nutrients of sea moss, this tea recipe is simple and easy to make.

Note- For cold sea moss tea, swap the hot water with the cold and mix the other ingredients as usual.

Looking for a spicy and flavorful sea moss tea recipe? Look no further, as this recipe is creamy and full of tangy zest.

Can You Put Sea Moss Gel in Hot Tea?

Yes! You can put sea moss gel in your regular hot tea to gain its health advantages. This seaweed can also be added to other beverages, soups, sauces, stews, and desserts.

Find out how much sea moss to take daily here