Popular as a superfood, sea moss has many skin and hair benefits to offer. But does sea moss make you poop? Let’s find out!

What Is Sea Moss? 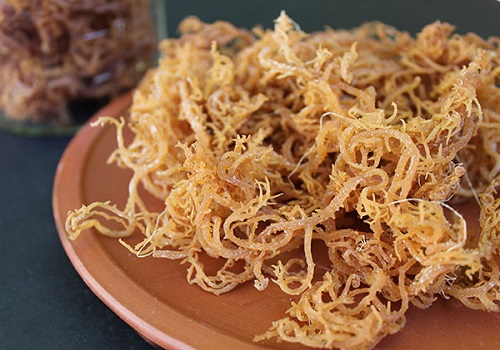 Sea moss is a red alga or seaweed that thrives on the Atlantic seashores of Europe, the British Isles, West Indies, and North America. It’s a superfood that you can apply topically and/or consume orally to gain its health benefits. Sea moss is used in several skincare products because of its skin-rejuvenating properties. Furthermore, it’s an excellent substitute for gelatin or other thickening agents.

The common names of sea moss are:

Does Sea Moss Make You Poop?

Constipation is responsible for irregular pooping, over 4 million people in the United States are suffering from this condition. There are various factors that contribute to constipation, such as dehydration, eating low-fiber foods and lack of physical activity. As sea moss is touted as a legit superfood with a treasure trove of health benefits, people start to believe that it’s an ideal product to induce poop as well. Surprisingly, sea moss can make you poop because of its high dietary fiber content, which increases the size of your stool and softens it, thereby stimulates quick and easier bowel movement.

To make you poop in a few hours, consume this homemade sea moss gel either solely or combine it with smoothies or drinks. A serving of 1-2 tbsps of sea moss gel is recommended for daily consumption. Furthermore, you can also use Irish moss gel on your skin and hair. However, if you have any underlying health condition, consult your physician regarding sea moss intake.

Make your own pure sea moss gel at home using the below recipe.

How to Store Sea Moss Gel?

Preserve your homemade sea moss gel, either in an airtight plastic, glass, or tin container in a refrigerator. By using this preservation method, sea moss gel last long up to a month or so. However, it’s highly recommended to use fresh sea moss gel for oral intake. Discard the gel if it smells or looks bad.

Sea moss has a plenitude of health benefits to offer but avoid its overconsumption at all costs. People with thyroid issues must consult with their doctor regarding sea moss intake as it’s a rich source of iodine. Besides, you can also try detox tea for regular pooping. For any suggestions and queries, please hit the comment button below.